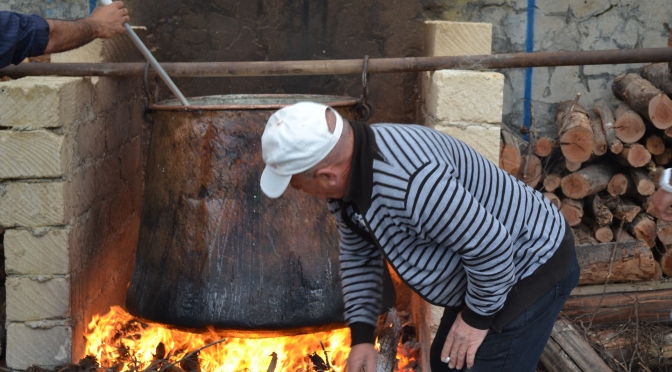 It was a beautiful day when we left our apartment but by the time we reached the Hyblean Mountains the sky had already started to turn grey and a fine drizzle had started to fall. Not to be put off and despite not having the right clothes on for getting drenched we decided that we would stick to our plan and visit the ‘Sagra della Ricotta’ – a ricotta festival in Vizzini that had already been taking place for two days. Now, I don’t mind a little bit of rain but it would seem that for everyone else this was too much and we arrived to an almost deserted centre with a lot of closed stalls or, if not closed,  in the process of closing. Also when I say almost deserted there was, in fact, a crowd of old men gathered under the canopy of the nearest bar, staring at the obvious foreigner who had come to their town in summer attire and who by now had rather wet feet. Maybe it is me and food festivals, maybe someone is trying to tell me that I should be doing a little less celebrating of food and more time hitting the gym, but this was not the first time a food festival that I have been too has been a complete wash-out. The last time was at the Pistachio Festival in Bronte when it rained buckets.

So, there were only a handful of stalls open but they were, and had started the process, of making  ricotta. Therefore, we stuck around. There were at least 6 caldrons on the go heating up the sheep’s milk for the first stage of the ricotta making process but only one of these groups were at the stage of slicing up the newly formed cheese so that they could recook it again hence why it is called ricotta – recooked. This meant that we had quite a wait until we were able to try the freshly made warm cheese with a bread roll (as standard). This was also confirmed when on asking when the ricotta would be ready we were told ‘at midday we can talk about when the ricotta will be ready’. With time on our hands and drizzle turning to rain we decided to  check out Vizzini.

Once home to Giovanni Verga for part of his life and a setting for one of his short stories which was later turned into a play, Vizzini is littered with brown UNESCO signs, I expect all related to Verga but then there are also some fine examples of baroque architecture. However, this was not the day to be looking down alleyways for his family house, so we instead headed to the church we had seen earlier. Churches always have their doors open, right? Wrong! Turns out it would not offer us shelter after all. Looking rather worse for wear and like the whole town, with weeds and plants growing in its cracks and from its spire, it didn’t look like it had opened its doors for ages; although I am sure that this can’t be the case. So we headed back up the hill towards the main square again, passing tractors parked outside houses and climbing up overgrown stairways, we even spotted cacti plants growing out of one person’s roof.

Now thoroughly soaked through (and a little out of breath) we hung around one of the few stalls that were open. It offered us some shelter and it wasn’t long before the stall holder was passing around bits of salami for us to try too. Except, I don’t eat salami. On refusing said salami with ‘Sono vegetariana’ and a slight shrug I was met with a flabbergasted response from one of the customers ( note – not the stallholder). With a stern face, as if I had mortally offended him, he said ‘What do you mean a vegetarian? What, like the cow?’. Then to top it off and with that same stern, serious stare  ‘Then I should eat you as you would surely taste good’. So in his opinion because I was vegetarian like cows and sheep are, I am ripe for eating. If he had had a bottle of Chianti with him I would have scarpered but instead I watched in disbelief as he finished buying his cheese and salami and then fortunately left without seeing if I did indeed taste good!

Anyway, it was at this point that we decided to buy fresh ricotta from the previous day and leave the increasingly  deserted Vizzini. It was just too wet and we were beginning to feel damp and cold and I was worried I had come across a town of cannibals. We bought some fresh garlic to ensure a good aroma for the journey (at least it cancelled out our damp smelling clothes) and switched on the sat-nav which promptly took us the wrong way. Finally on the right road we passed the most gorgeous cluster of poppies  and discovered some wild fennel and artichokes growing nearby, After collecting some fennel (as the artichokes weren’t ready) and taking some photographs we headed back to Catania discussing what we could make from the ricotta.

In the end we gave the ricotta to the mother-in-law who promptly gave us a long list of what she could possibly make (Sicilian ‘mammas’ are the best cooks). The next night everyone came round to our place to make ‘Frittelle di Ricotta’. Everyone got involved under the direction and strict supervision of ‘mamma’, except ‘mamma’ didn’t supervise too closely when her son ground down the sugar to dust over the ricotta parcels. Instead of picking up the sugar my beloved partner had picked up the salt. He didn’t lightly dust the parcels either. His, slightly ravenous by this stage, brother was the one to discover the mistake. As he bit into the supposed sweet his face turned to disbelief and he uttered ‘No, e sale?’ (No -it’s salt?) Now I would have instantly removed the offending dessert from my mouth and would have made a big spectacle of doing so but he didn’t. He carried on looking confused, shocked, disappointed even but continued to eat the now savoury, sweet dessert whilst the rest of us did our best to brush of the salt and save the other ricotta parcels.That is how hungry he was. However, this mistake led to so much laughter and they still tasted good so although I am not sure I will go back to the ‘Sagra delle Ricotta’ next year, I am definitely glad we made the effort this time (and I have since labelled the salt in the cupboard to avert future disaster). 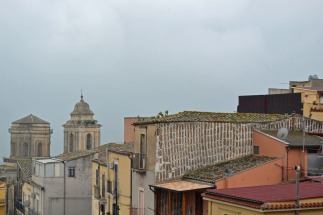