The thing about living in Sicily is that there is so much to discover, yet only a few people seem to be ‘in the know’. So much potential, tourism-wise, is just wasted, ruined even. Take the Salinelle di Paterno, for example! Little exploding mud volcanoes in other countries are made into tourist attractions. They are nature’s little wonders. They are to there to be seen, admired and wondered at. You don’t have to be a vulcanologist to be excited by them. In Paterno, on the slopes on Etna, their beauty, their fascination is lost on the locals who seem to view it as a place to dump their rubbish. People have tried to make it an attraction. The Inner Wheel Club of Paterno erected a detailed information sign in 2014. However, if you went there today you would see rubbish strewn around it. It is located next to an abandoned and vandalised stadium which probably should never have been built there in the first place. You can peer through the fence and glimpse the mud spurting from the ground like we did but the rubbish is off-putting and you really feel let down by the whole experience. Many of my students are unaware of their existence even though they made the local news the other day with new explosions splashing mud all over cars and a mud river running, or should I say, slowly moving down the street (see link to article here). 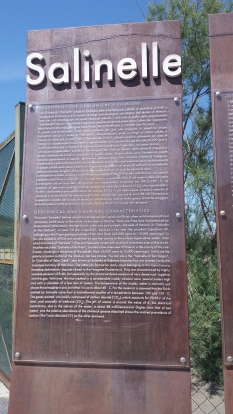