Last week, I was in shorts. It is fair to say I got a few strange looks from the locals. A few old people shivered and drew their coats up around their necks as they passed me, but it was 22c and for me that’s summer.

That was last week though. The temperature has dropped significantly and winter has rocked up, shocking us to the core. Most Sicilians now look like they are about to go on an expedition to the Artic. It surprises me how many winter clothes they have, considering they get such a relatively short winter. Like it or not, old ladies are wearing fur which has  passed down generations, mind you, I have seen fur coats being worn when it is 20c.

The best thing about this cold snap? Snow. Snow has turned parts of Sicily into a winter wonderland, especially in the Madonie mountians and on Mt Etna. Schools have closed and everyone is grappling with snow chains or rushing to buy them. Avid skiers are looking for news as to when the ski runs will open. It is exciting that you can ski on an active volcano while marvelling at views of the sea in the distance. It is also quite scary, not just that the volcano could erupt at any time but also when you are up there it looks as though you are going to ski right off the edge into oblivion! But if that’s not for you then there are other places to ski in Sicily, such as the Madonie Mountains at Piano Battaglia. If you want to know when the slopes are open then you can check out www.pianobattaglia.it and Etnasci.it.

And if skiing isn’t your thing, then you can partake in the popular pastime of Catanese and drive up to Etna, pile a load of snow onto your car bonnet and drive down the mountain and see how long it takes for it to melt! 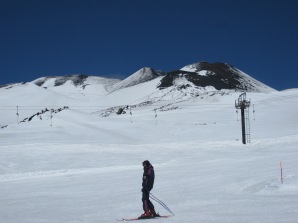 One thought on “We’ve got the snow, now when can we ski?”