Around every third Sunday in May, Noto holds a flower festival. Now, I am familiar with Cities in Bloom in the UK but this festival is something else. It would knock every city I know out of the competition. I first went two years ago and was taken aback by how colourful the display was and amazed by how creative the designs were. This year was even better. There were flower displays everywhere! Noto is a pretty city anyway but the festival really brings it alive. I would go as far as saying that it is the best festival in Sicily and that says a lot as there are many.

We arrived early in the morning to beat the crowds. I am so glad that we did as we were the first up through a narrow and winding staircase to get a bird’s eye view of this year’s main display. The theme changes every year and this year it was ‘Ospiti il Mondo’ or ‘The world is our guest’ (or close enough). The displays are made up of soil, petals, flower heads and even vegetables. I have posted a photo which shows the damage a bit of wind can do but these ‘temporary works of art’ are taken care of and any dying flowers are quickly replaced. The main display takes up a whole street, there are churches either end where for a small fee you can admire the displays from their rooftops (worth it) and withoutany fee whatsoever you can walk alongside the flower displays but patience is a must as everyone wants to stop to take photos and who can blame them? First time visitors should take note and not forget to look up from the eye-catching art as the baroque balconies are outstanding. This year there were further displays near to a church and along another street further along. There were also lots of craft stalls, some traditional entertainment and lots of refreshments on offer, including some lovely craft beer which was I could go on and describe in detail what I saw but as a picture says a thousand words, I will post a lot of pictures instead. Although if you can get here and see it for yourself next year, even better! 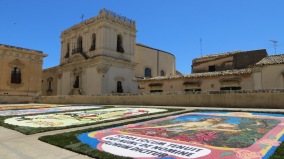 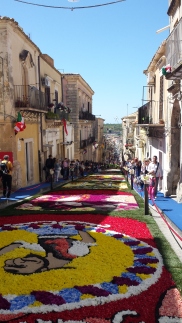 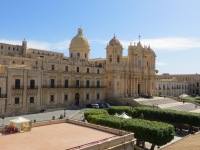