There is a beautiful Italian film called ‘La Notte di San Lorenzo-The Night of the Shooting Stars’. According to Italian folklore the night of the shooting stars is when your dreams/wishes come true. It traditionally falls on the 9/10th August. This year there will be a supermoon but there is still a good chance of seeing a number of shooting stars. A number of events take place during this time to celebrate the event. Meteor showers over the next few nights extend the period with the peak period for San Lorenzo this year falling on 12th August and then on 18th August Jupiter and Venus will supposedly be shining brighter than normal. It means take your siesta on these hot August days and stay up longer during the night and observe the fabulous night skies. In Sicily lots of vineyards hold events which seems to be a good mix, a glass of wine whilst gazing at the stars and listening to music. To get the best views though I would head to the mountains, Etna, the Nebrodi or Madonie mountains are bound to provide you with the best views or there head to Castligione di Sicilia. We saw a number of shooting stars whilst on Mt Etna viewing the lastest eruption a few night ago so I can only imagine what the next few nights will bring. 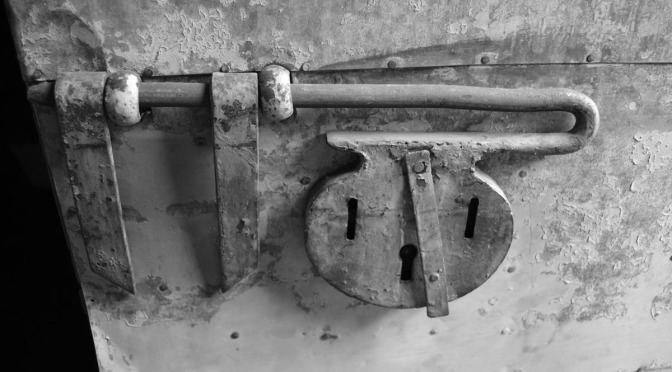 My favourite tipple has to be wine, the red variety the most but I am not adverse to a glass or two of white at lunchtime on a hot and sunny day. Therefore, when I discovered that on one weekend of the year vineyards throughout Italy open their wine cellars to the public and celebrate their wines with a host of activities I jumped at the chance of attending an event. As the one in Nicosia was closest to where we live and as we didn’t know much about their wines we decided to head there.

Upon arrival it was immediately noticeable that this was a big operation. I have been to other vineyards to buy wine before but this one looked huge and has a stunning view of Mt Etna in all her glory. A beautiful covered entrance leads you through the story of Cantine Nicosia with pictures and old wooden wine making equipment that has since been replaced with modern technology.

Although this was a free event you had to pay 5 Euro for a glass which came in a handy pouch which you hung around your neck. You were then free to taste and drink as much wine as you wanted. We decided to start our experience with a free tour of the cellars. A very informative tour it turned out and a glimpse into a massive wine producing operation where technology means that they have a much reduced workforce. We were told about the whole wine-making process which included being taking into the lab where they had lots of bizarre looking equipment which they used to make sure the wine was top-notch. Seeing the bottles of chemicals actually put me off a bit. After that we headed for the mini wine tasting course.

I had expected the wine tasting course to be the highlight of the day. It wasn’t! Firstly, we had a too long and rather patronising rant, oops I mean sales pitch, from the National Organisation for Wine Tasting. The guy for one spoke way too fast and seemed way too smug. He appeared to inform the room, in one way or another, that he had a higher intelligence than the rest of us lower beings and that due to his enhanced receptors in his brain was able to understand and appreciate wine more than we would ever be able to – unless we took their full course that is! I am sure he would protest this but to me he definitely came across this way. So, we eventually (after about 30 mins) got to do some wine tasting. We were shown how to hold the glass, lift it to the light to check its translucence, sniff it ( a better person would have been able to smell the freshly toasted bread, I couldn’t) and then ultimately taste it. We started with a sparkling wine which was rather nice. We were told that the more bubbles it had the better quality. We moved on to a white, Etna Bianco which to me was very light and then a red, Etna Rosso. I didn’t really get the smell or taste that the man was telling me I should be tasting, smelling so I guess I failed the course. For the first time ever on a wine tasting I didn’t mind pouring the remainder of wine in my glass away either. This is not to say their wines are not good. I find wine to be a matter of personal taste much like art is. Furthermore, they make a cracking Zibbibo and Malvasia. Maybe I was off that day, maybe if I tried the wine again I would like it. Anyway, I couldn’t bear to listen to the expert go on any longer so we skipped the very last bit and probably missed out on a damn fine wine. 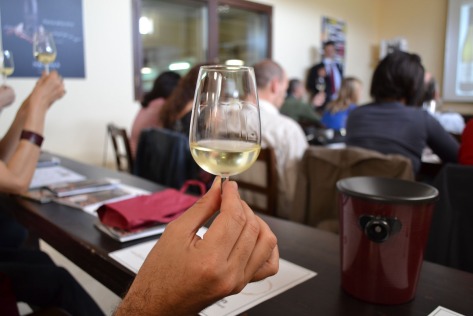 Next we headed for the minibus which would take us to the vineyards. The view was gorgeous and the tour again very interesting and informative. The vineyards are on the slopes of Mt Etna at the foot of a very old crater. The soil here is very acidic and despite the heavy rain we had had in the morning, it was bone dry. At the vineyard we were also shown the old cellar and wine producing area. Seeing this made me realise just how much they have grown as a wine producing company. I am glad they keep these old buildings as a type of museum, old wooden barrels look so much more appealing than the modern metal wine vats and it seems so romantic to imagine the whole village crushing the grapes with their feet. 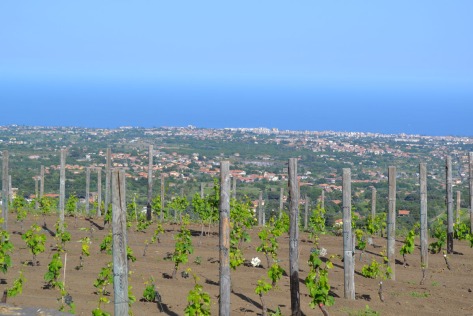 After the vineyard tour we headed to the ‘Art & Culture’ area. This was fascinating as local artists demonstrated their talents in Sicilian crafts. There was a guy tapping away at a bronze plate for one of his Sicilian puppets, a man carving a wooden post for a Sicilian cart, a man basket weaving, a painter and an incredibly interesting guy who makes sculptures from lava. All of them were friendly and welcoming and ready to explain their works. Around the corner there were further stalls selling local produce such as goats cheese, marmalade, olive oil and even a Zibbibo granite which was delicious.

What impressed me most about the day was how much effort had been put into it and how well attended it was. There was an abundance of wine to taste, the garden area was beautifully laid out with ornate tables and chairs and there was a whole host of tours and demonstrations. I must admit that out of all the cellars & vineyards in the Etna area this one seems to be better at publicising themselves. Their website and Facebook page is kept up to date which is not always the case with their competitors and they have fully embraced wine tourism, so hats off to them. I’ll be going back to check out their restaurant that’s for sure.